Kudroli temple the Hundred years Celebration (1912 – 2012) , is the center of attraction during the Navarathri festival. The Kudroli Sri Gokarnanatheshwara Temple was built in the year 1912 by Sri Narayana Guru. Gokarnanatha is the other name for Lord Shiva. The temple is 2km from the centre of Mangalore city. The temple has Gopuram (tower like huge structure) decorated with murals of various gods and goddesses. Murals depict the scenes from Hindu epics and legends.

The Kudroli temple trust keeps the `Gangavatharana’ (Ganges water flowing from the crown of Lord Shiva) in operation for all 9 days during the Navarathri. The depiction has 4 colorful idols of Shiva 13 feet high with jet of water rushing towards the sky to a height of 100 feet. As the water from four sides reach their pinnacle they take shape of a Shivalingam. Color lights around the place add to the glory of the site.

Way back in the 18th century, entry into the temples was banned for backward classes and the downtrodden. So the leaders & senior citizens of billava community longing for equality on matters like these gathered themselves & sought solace from the spiritual head of their community “Brahmashree Narayana Guru”, 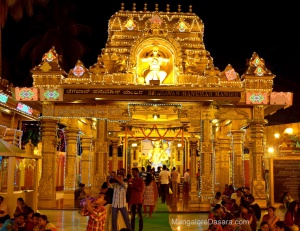 who had achieved an incredible in religious revolution in Kerala during those times of divine movement. He had proclaimed that every creation of God has a right to worship God and there is only “One Caste, One Religion and One GOD”. He built 101 temples all over Kerala and provided direct entry into the temple to each and everyone.  The senior leaders of the community under the leadership of Sri Sahukar Koragappa went to plead with Guruji to extend the movement and his deeds to Mangalore as well. Shri Narayana Guruji consecrated the Shivalinga that he had brought to Kudroli temple at Mangalore and named it as “Kudroli Gokarnanatheshwara” in the year 1912.

The temple combines the modern architecture with traditional science of sculpturing on the themes of Prateeka Sampradaya of Adhwaithamritha. Sculptors Sri S.K.Achar & his son Sri DakshinaMurthy undertook the modernization work of this temple under the leadership of Sri Janardhana Poojary – Former Minister of State for Finance, Govt. of India;  who is the architect of renovation & reconstruction of this glorious temple. 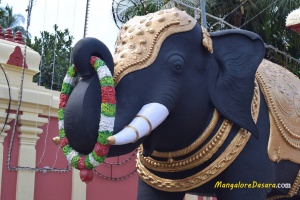 The temple has an entry porche of the elephant – Gajaraja and has an expance of 2 Lakh sq. ft. complete with marble flooring. Lakhs of pilgrims belonging to different castes, communities & religions come and offer prayers here. There are instances of many people who have been cured from different ailments by the grace of Lord Gokarnanatheshwara.

Mangaladevi at Bolar being the ancient which drags devotees all over india celebrates the Dasara festival. Mangalore got its name from Mangaladevi. Mangaladevi temple arranges for various cultural programmes such as folk, music, drama, plays on various themes, ballets and devotional songs.

On the ninth day also known as mahanavami, a large number of devotees participate in the rathotsava (car festival) . The decorated godde

ss in mounted on the grand chariot and pulled with thick ropes. The procession (Rathothsava) filled with various deities and many number of tableaux gloriously decorated with colorful lights and festoons. The procession reaches a location at Marnamikatta where the goddess is worshipped. Which brings prosperity and happiness.